I've gotten several requests to know what my booksigning schedule is for 2008 so I thought I would post what I know currently.

On January 19th, I'm participating in a multi-author booksigning at the public library located in Manchester, TN. I'll be signing copies of my first novel, JANE MILLIONAIRE, and should have copies of my first Harlequin Mills & Boon Medical, THE DOCTOR'S PREGNANCY BOMBSHELL, too. One of the other authors participating is a friend who recently published his first book and amazingly asked me to give him a cover quote--how cool is that????

I've also been asked to do a booksigning in McMinnville, TN. I'm thinking that one will likely be scheduled for February. I held a signing here after Jane came out and sold out. It was a great signing so I look forward to going back. I'll post more information on that once details are arranged.

In April, I'll be signing books in Gulf Shores, Alabama and in Pittsburgh, Pennsylvania.

In May, I'll be in Huntsville, Alabama.

In July, I'll be signing in San Francisco, California.

In October, in Newark, New Jersey.

In November, in Birmingham, Alabama at the Homewood Library.

For now, that's all that I'm aware of, but the life of a writer is a fluid thing and one must learn to go with the flow early on. I'll keep my blog updated of my schedule and any changes. If you live in or near these areas, be sure to pop in to say hi!
Posted by Janice Lynn at 9:08 PM No comments: 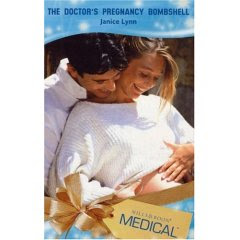 http://www.millsandboon.co.uk/cgi-bin/millsandboon.storefront/EN/Catalog/1032?month=November2007
I know this is a silly little thing, but...The Doctor's Pregnancy Bombshell SOLD OUT in the UK!!! Well, that's what Mills and Boon's website says anyway. :) Yea!!! No worries though if you haven't gotten your copy yet! The US release date is January 1st 2008 and you can get your copy from eharlequin.com at that time. :) Again, it's just me being silly, but OMG! I sold out of a book!!! Dancing on the ceiling!!! YEA!!!

While I was buried in the play and in revisions of my 4th medical, December snuck up on me. I am SOOOOO far behind with Christmas. I do have a few gifts purchased, but none for my kids...that's a bad Mom, right? Which means what will end up happening is that I'll pay way too much on ebay to get what they really want because all the stores are sold out. Wish it wasn't so, but...

I turned in the revised version of my 4th medical today. It's a really different book for me and although I should be sick of it since I've done 2 rounds of revisions, I find that I love this revised version. The story really packs an emotional punch. I cried when I wrote one particular scene. And again when I reread the story. I'm hoping that's a good sign...of course, it's possible it just means I was in tears over how many hours I put into this book. Truth is I've got more than double the number of man hours in this book than I do in any of my other medicals. I'd guess that I might have close to three times. A little sad, but, as I mentioned, the final product---please let it be the final product---is something that I'm very proud of. I'd like to say that you should have a box of tissues nearby when you read it, but who knows if anyone will find it as moving as me? Y'all will have to let me know come next fall. :)
Since it's Christmas time, here's a pressie. Enjoy. Posted by Janice Lynn at 9:10 PM No comments: