y
Well, I'm not really going to catch up. I never do. Fall is such a busy time of year for me and my family. Currently we are in the midst of soccer season for 2 kids, football for 1 kid, 2 plays for 1 kid, basketball for 1 kid, and then all the normal stuff--karate, boy scouts, clubs, etc. My daughter isn't taking piano right now due to her sports' stuff interfering with times. Plus there's all that back to school stuff that goes on. Are you tired yet? No? Well, let me keep going. ;)

I'm currently revising two medical romances. I think one will be a late 2009 release and the other an early 2010 release. I'm working on a single title project, also. And my agent is gearing up to shop a different single title project later this year. Did I mention that I also work full time?

I also had my 20 year high school reunion last month. So difficult to believe that 20 years have passed since graduation. I mean, I still feel like a teenager, why isn't my body behaving and looking like one???? ;) It was great seeing old friends who I rarely get to see, particularly my pal Tori. :)

Anyway, life is good. Everyone is healthy and busy. But I'm not making it over here as often as I'd like. The important thing is that I am writing on my books though. That's what most of you are most interested in based on fan mail--when's the next book? And to answer that question--the hardback of Surgeon Boss, Surprise Dad comes out in December & the paperback version will be released in February. :) Yea! That book is one that's very dear to my heart. Yes, I know, they all are, but some more so than others. Of my Medicals, The Heart Surgeon's Secret Son and Surgeon Boss, Surprise Dad are my two favorites. Probably because of the emotion in those books. That said, I think y'all will enjoy The Nurse's Baby Miracle, too. It'll be out in late spring 2009. :) That one is set at a 3 day breast cancer walk. Yes, I did draw upon that horrendous (but also good) experience I went through in 2006 when I did the 3 day walk with my fab-o agent, Deidre Knight. I like that book because of the setting--and the characters.

For those of you who have emailed asking about the puppies--they are fabulous. We only kept one of them, but our next door neighbor also kept one, so really we get to see & play with 2 of them. The kids LOVE our puppy. They named him TROUBLE. For those of you who know me, we had a Jack Russell named Trouble who died the week after we moved into our new house last summer. I had mixed feelings on naming the puppy after him, but all 4 kids agreed on the name and it's so rare for all 4 to agree, well, you understand. :) So, our new Trouble is half Jack Russell, half Chuawawa (I have no idea how to spell that, but sound it out please). Surprisingly, he's cute. ;) 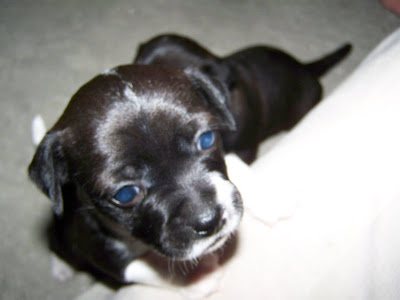 Hopefully it won't be a month before my next post, but priorities are priorities and the kiddos come first and when it comes to computer time, well, the writing comes first. I do tend to pop in frequently at my group blog though. My bestest pals are there and we have lots of fun with our playtime. :) www.writersatplay.com/wordpress We also do some fab give-aways. :)