Colleen Gleason's The Rest Falls Away 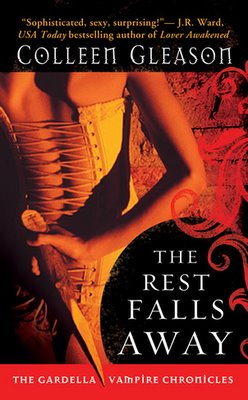 Check out this interview with Colleen on how she came up with the idea for her fabulous new serious--and then check out the book! It's available NOW!!

About three years ago, I discovered Buffy the Vampire Slayer.

I've never been a big fan of vampires or horror movies, and I've never (still to this day!) read Dracula, but on the eve of Thanksgiving 2003, when I was cooking my fanny off in my kitchen in prep for the next day's dinner, I brought my laptop in to keep me company. I'd borrowed my friend Brian's first season of Buffy and I popped a DVD in just for something to watch while I was cooking.

I got hooked. I watched the whole first season that weekend, in between cooking and visiting and all the other stuff we do over the holidays. But in the back of my mind, I kept thinking about that show.

In the mean time, I'd been writing novels for years, trying to get published. I'd written contemporary stories, but my real delight was in writing in historical settings. Plus, I loved authors like Jane Austen, Liz Carlyle, Julia Quinn, and others who set their stories in Regency England.

As the months went by and I was trying to figure out what my next writing project should be, I noticed that there were a lot of books being published-and sold-with vampires in them. Many of them didn't appeal to me, because I don't find the undead romantic. To me, vampires were the bloodsuckers I'd seen on Buffy, and in the movies; but to me they weren't romantic heroes or heroines. My concept and opinion of the undead was not a sympathetic one.

So I didn't consider writing about vampires, even though I knew the market was hot for stories about them.

Until I happened to watch a Buffy episode in which Angel/Angelus (a male vampire) has a flashback to a scene that takes place in 19th century Paris.

And then the following night, I was watching the Disney version of Rodgers & Hammerstein's Cinderella with my daughters.

And I started thinking what if Angelus was at the ball with Cinderella?

Then I thought well, what if Buffy was there too?

Or, better yet what if Cinderella was a vampire slayer herself?

That was the germ of the idea that blossomed into the Gardella Vampire Chronicles.

I ultimately decided to set the first books of the series in Regency-era England, which is arguably the most popular setting for historical romance novels. I realized I was taking two very hot ideas: vampires and Regency England and putting them together.

The thing that makes The Rest Falls Away different from a lot of the vampire books is that the vampires are the villains, through and through. There aren't any tortured vampires without a soul. There aren't any predestined soulmates. The main characters of the series are mortals, not vampires.

The story isn't about a vampire culture or society in Regency England. It's about a woman who learns that she's a superheroine during a time when women are supposed to do little but stand around and look pretty until they find a husband--then to wed, bed, and breed.

She learns that she has a task to do, one that is a family tradition (which makes her different from Buffy), but like Buffy, she has to learn how to balance the two sides of her life.