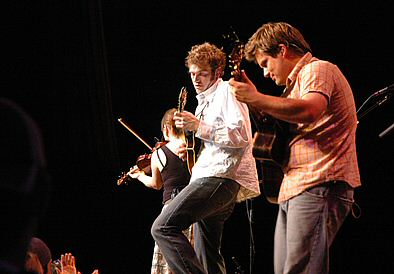 Well, there are an extra 80,000+ people in the town where I live. That's over triple the population for the entire county. Why would that many people travel from all over to visit a small middle Tennessee town? For the 5th year of a Woodstock like concert that lasts for several days called Bonnaroo. I've never been although I love some of the bands that are there. In the past, some of my 80's favorites like Joan Jett & the Blackhearts and Rick Springfield have been there. Lots & lots of other big name bands old & new. This year, the name that caught my eye that I'd like to see was Nickel Creek. I saw them play at an Amy Grant Christmas concert and their pure love of what they were doing hooked me. When I hear a song by them, I remember the joy and enthusiasm with which they played. It was magic just to watch them. Someday when they're playing at a smaller event I'm going to go watch them again. I hope they never lose that special high just from doing what they love because it's amazing just to watch them. My hubby & I both were impressed by the way they put themselves into the music they played. If you ever get a chance to go see them, definitely do.

I often think about watching them play when I hit a particular high with my writing. Not that I dance around and sing (well, okay, sometimes I do, but we should so not talk about that!), but that I literally feel like I'm floating when I get a scene just right or when I've finished a book that I love. Every person should have something in their life that brings them such pleasure. :) 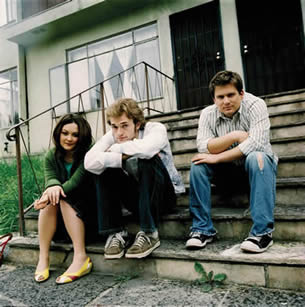 Off to watch my daughter's softball game. :) Go A Winning Attitude. Isn't that just the coolest name for a team?
Posted by Janice Lynn at 3:48 PM

We love Nickel Creek too. They're so talented, just pure, beautiful music with no gimics.

Congrats on starting the new book.

Oh, THAT'S the concert my son was watching on the internet last night! We listened to Tom Petty -they played over 2 hours!

Mary, you'll have to let me know if he wants to go to the concert next year. It's an annual event. They limited the tickets to 80K this year & it sold out, so he'd need to get tickets early. There are lots of folks holding signs saying they want to buy tickets. It's kind of fun to watch the mix of people the concert brings into my small hometown.

I'd never heard of it till this year! No idea it was yearly! Very cool!