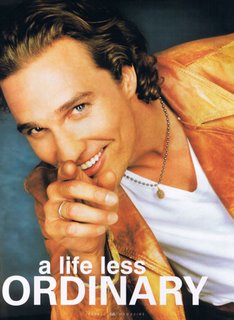 So, when I was searching for a fabo picture of Matthew to post on my blog tonight, this one caught my attention. The saying as much so as the gorgeous man.

A life less ordinary--that's sorta what we're all looking for. Meaning. Purpose. To feel that we made our mark on the world in one way or another--hopefully a positive one. To know that when we reach the end of our days we can look back and know that we reached for our dreams and lived a life that was less ordinary. I like it. Especially at this reflective time of year when many of us are looking back over 2005 and preparing to set New Year resolutions. A life less ordinary.

I finished up the rough draft of Causin A Commotion last week and have been toying with it, trying to figure out why I'm not quite happy with the story-line. I took a break from it today to read over The Glass Slipper. My agent plans to submit it in early January. It's my first attempt at a paranormal and it's a light, fun story. I had a lot of fun with it and just adore the ending. To me the ending is soooooo important. I can love a story and then if it doesn't end right, well, it just ruins the entire thing for me. For instance, hubby and I watched Cold Mountain. An excellent movie--up till the end. I won't give a spoiler for those who haven't seen it, but I really, really wanted to rewrite that ending. In my mind, I did a hundred times. The characterization in that movie was fabulous, btw. I've never been a Jude Law fan, couldn't have even named anything he was in, but I have to admit, he did a fantastic job and his character was such a true hero that you couldn't help but fall in love with him. But I'm a romantic at heart and want my happily-ever-after. If a book or movie doesn't give it to me, I'm disappointed---or dream about the movie all night, giving it alternate endings. :)

A Life Less Ordinary--I'm going to come back to this in a couple of days when I write my resolutions...think I can list Matthew under my tree as a goal for 2006??? LOL. Guess I better stick with things a bit more realistic--and that won't lead my husband to asking for a divorce.
Posted by Janice Lynn at 8:50 PM

You're so right about endings, Janice. I thought Must Love Dogs was good, and How to Lose a Guy in ten Days, but both of them lost me at the end.

And let's not even TALK about Message in a Bottle.

That's why I haven't finished MY ms. I think I have the right ending, this time, though.