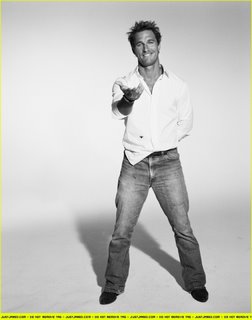 I got several fabulous emails letting me know that Matthew was on Oprah!!! Woo hoo!!! I haven't watched it yet, but asked a friend to record it for me so hopefully I'll see it soon. Someone emailed to tell me that Matthew & Oprah shot Tequila???? Interesting. Not that I wouldn't let Matthew get me drunk. ;)

Yesterday was an interesting day. I judged another contest entry yesterday morning. Unfortunately it was a slow moving one. Lots of potential, but definitely read like a beginning writer. Reminded me that not so very long it was my newbie contest entry that someone was volunteering their time to make suggestions on. Ah, the circle of life. :) I just have one more to go & then I'm through with both contests I'm currently judging. Yea! I enjoy judging but I had 10 entries from one contest and 8 from the other and that's a lot at one time in my opinion. Then I curled up on the sofa and watched Cold Mountain--yes I wanted a Jude fix and I like his character so much more from CM than Alfie or Closer (now there was an interesting film).

I had lunch with my mother-in-law & sister-in-law and we ate Mexican. Yum & lots of fun. We laughed and laughed.

Went home wrote for an hour then went and picked kids up from school. Cleaned house a little and then wrote until hubby got home. My sister called and my brother-in-law was feeling yuck (I haven't mentioned it here, but he's a police officer and was shot in his hand last week--which partially explains why I haven't blogged as steadily). He's home from the hospital but his meds were making him sick. I did a house call, gave him a shot (I'm a nurse practitioner in my real life), and reportedly he had a better night last night than the one before. Going to make another house call prior to going in to the office this morning.

Plus--and this is the kicker--I wrote a bunch of pages on my new story! Yep, the Jude story. :) I'm on page 364 of the first draft. Very excited as I didn't get a chance to write on Monday or Tuesday this week due to work, Girl Scouts, Boy Scouts, & Karate & family stuff. Very excited as I should finish the rough draft this weekend!!! I LOVE this story. I've had so much fun with it. I've bought a website that fits with the story and plan to play with that some once I get the story done & polished. Promoting this story could be an absolute blast!! Even more than Jane Millionaire I think--which was pretty darn fun!!

Woke up this morning to a sprinkling of snow. Not enough for the kids to stay home from school, but enough that the ground is almost white. That's the most we've gotten yet. :)

Okay, off to make my house call & then on to the office. Sick people await. :) Y'all have a great day & thanks to everyone who let me know about Matthew on Oprah.
Posted by Janice Lynn at 6:03 AM

Congratulations on getting so much writing done! But 8 and 10 entries - that's just cruel! I have 5, I think.