I'd planned to blog from the hotel each day. Unfortunately, Internet connections weren't that great at the hotel and I kept getting kicked off before I could get a blog in. Sorry about that, but I intend to make up for it over the next week by recapping my week at Nationals.

I drove to Atlanta and arrived around 4 PM. Traffic was good & the weather was perfect. After arriving, I checked in to the hotel & immediately ran into my pal Gemma Halliday (who has a fabulous book coming out this week called SPYING IN HIGH HEELS--I've read this book. It's awesome & you should definitely get a copy!!) while registering. A group of close pals were hanging in the Atrium & called to tell me what I was wearing as the were spying on me from the balcony--what are friends for??? ;) After lots of hugs, we all sat around talking for a couple of hours and then it was off to The Knight Agency's 10th Anniversary party. We all met at 6:30 in front of the hotel and took two big tour type buses on a one hour cruise toward our destination. Everyone looked gorgeous in the garden party wear.

The Knight Agency is located in a wonderful area of Georgia that avoided being burned by Sherman. The buildings there are amazing, including the infamous Knight Agency. After exiting the buses we traveled down candlit lit walkways to where a tent was set up with a wide selection of delicacies. Immediately I was offered shrimp & other mouth-watering goodies. Yum!! But the absolute yummiest part of the party was the pecan pralines--let's just say that Janet Campbell & I developed an obsession for that station and devoured our share of the delicious dessert and then some. My big can-I-just-crawl-under-the-table? moment of the evening was when I was at the praline station and took a couple of pralines and then took a spoonful of pecans from the silver bowl also on the table. Apparently, those pecans in the bowl complete with serving spoon in their midst weren't really for consumption and the catering lady manning the station goes, "oh! Those are just for decoration." Ack. But since that was my only big goof for the night I figure I made out pretty good. 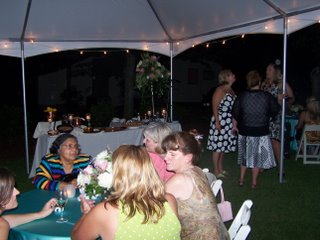 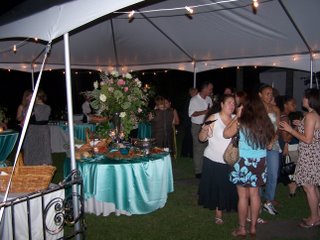 Glimpses of THE conference party to be at!

Friends in attendance included Michelle Buonfiglio, Marley Gibson, Diana Peterfruend, Gemma Halliday, Leslie Dicken, and quite a few others. Plus, I met lots of other wonderful people--TKA clients and staff alike. Meeting Pamela for the first time was a blast. Julie & Elaine, too. The entire night started the conference off with a bang! Fun and laughter rained supreme with conversations about furry pocketbooks and taxidermists (amongst other things) that don't bear repeating, but had me laughing so hard tears ran down my cheeks. 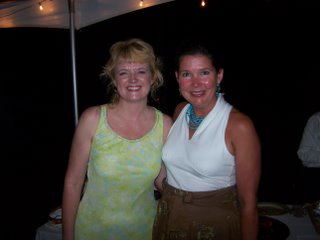 So, to sum up The Knight Agency party---great food, great company, and a wonderful atmosphere. A total success--but then, how else would one describe anything to do with TKA? They rock!!!! & I'm proud to be a part of such a talented group. 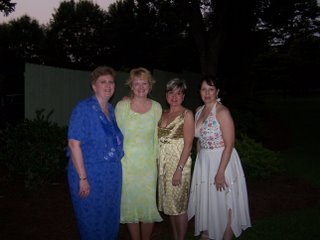 Janice & friends at the party!
Posted by Janice Lynn at 6:37 PM

The Girl You Used to Know said...

I had such a great time at the TKA party and loved meeting you and Janet. You guys crack me up.

Cleaning Atlanta up, one praline at a time...