Watched this last night. Of course, I found Matthew to be absolutely adorable. What can I say? The man has charm & I'm a bit biased. Just a weeeeeee bit.

I laughed out loud several times during the movie & so did hubby. I also drooled over the chest scenes--Matthew's NOT Terry Bradshaw's, which in my humble opinion could have been left out completely. I mean, who wants to see Terry Bradshaw in the buff? Not me, but I suppose there are those who do. Personally, I think they could have left out the butt shot & the movie would have been just fine & I would have one less EWWW moment in my life.

Anyway, it was a cute movie & a fun role for Matthew to star in. I like him better in this role than Sahara, but am glad that Sahara was the movie out when I named my laptop though as I would hate to think of my computer as "Failure to Launch". 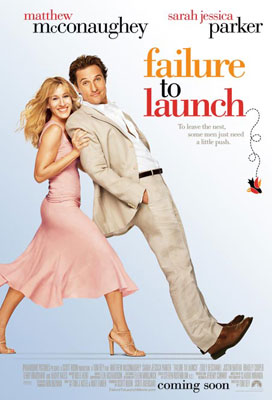 I really liked this movie, too. For the first time since Time to Kill, I got the MM appeal ;)

Oh, I definitely GOT his appeal in this one, too. ;)